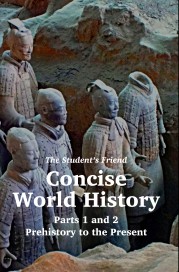 Hello again. In a blog post about five weeks ago, I raised the question of where to go from here in advancing the goal of Future-Focused History (FFH) education.

In the intervening weeks, I was distracted by technical problems with this blog, the publication of my recent article in the NCSS journal, and personal projects. I’m back now, and plan to concentrate on discussing with you the future of FFH schooling.

Here’s where we stand at the moment. There is the book I published last year that documents the declining role of history education in our schools and colleges and outlines a hopeful vision of historical learning that can be useful to peoples’ lives. And there is this blog, which has been in existence for three months (and summarizes some of the main points raised in the book), and there are the 78 souls who are interested enough in this vision to sign up to follow the blog.

Most blog followers are history teachers, an exceptional group of educators who have moved beyond the concerns of day-to-day classroom survival to consider the fundamental questions behind history schooling: Why does it exist, and how can it best fulfill its mission? I am honored to be in the company of such people.

Over the past few weeks, it’s become clear to me that the FFH vision needs to move beyond theory to practice; teachers want to see a curriculum. Fred, a follower of this blog, wrote, “Mike, so just as an example of FFH, if I am teaching the Age of Exploration to my grandson through homeschooling, how would I implement this system?”

Veteran teacher Chase Parsley suggested that we try to identify “the principles, cognitive learning strategies, and historical knowledge we think are important (like suggested in the book), and go from there? Maybe… producing some sort of canned curriculum?”

On the FFHistory Facebook page, a thoughtful teacher named Justin Schwenk also asked about identifying principles of history, which are a cornerstone of FFH education. He writes, “Who gets to define…what a comprehensive list of “principles of history” are, and how do we arrange them into a curriculum?”

The final chapter of my FFH book (most of the book, actually) discusses in a general way how FFH education might be implemented in the American system of schooling. But for FFH schooling to become a reality, it will need a classroom-tested curriculum that features effective lessons.

So, we need come up with volunteers who are willing to pioneer the FFH concept by experimenting with FFH in their classrooms. Some of you have already graciously volunteered to help—which is terrific. But perhaps we need to first identify, as Chase and Justin suggested, a set of important general principles of history that can be incorporated into a history curriculum.

If we can pin down a suitable list of general principles of history to start with, maybe we could begin to experiment with adding them to the curriculum by next semester. As always, your input is welcome. Nay, it is essential. -Mike

3 thoughts on “Where do we go from here?”